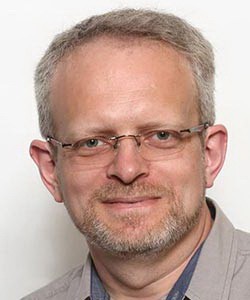 Vyacheslav Kalchenko obtained MD (1993), an internship in Neurology (1994), and Ph.D. (1998) from the Chita State Medical Academy (Russia). Till 2001 he worked in industry and academia as an adjunct lecturer of the Department of Biomedical Engineering at the Chita State Technical University (Russia).

After a postdoc at the Weizmann Institute of Science (Israel) (2002-2004), he became the Head of In Vivo Optical Imaging Unit at the Department of Veterinary Resources. Since its foundation, the Unit has extended from the small core facility to the world-leading Optical Imaging & Translational Bioengineering Center. As a result, it has a wide range of state-of-the-art imaging and additive manufacturing equipment.

Since 2015 he is also a Senior Staff Scientist at the Weizmann Institute.

His research interests are focused on the conjunction of photonics, 3D imaging science, digital neurology, AI, and bionic phantoms development.

He is the author and co-author of over 100 research papers in peer-reviewed scientific journals, proceedings of international conferences, patents, and book chapters. In addition, he has over 100 presentations at the major international conferences and symposia, including about 40 invited lectures and plenary talks. He is a Fellow of the Royal Microscopical Society, and Senior Member of SPIE, and an Honorary Professor of Chita State Medical Academy.