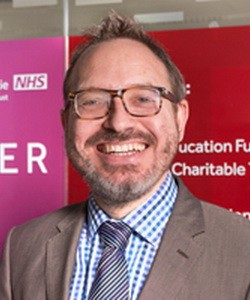 Professor Paul Townsend was appointed as Associate Dean for Business Engagement in August 2016, and was reappointed for another three years in October 2019. This continues a role held at the Faculty of Medical and Human Sciences from February 2013.

Professor Townsend was previously the Chair of Molecular Cell Biology at the University of Southampton. He was also Associate Director of Enterprise & Innovation for the Faculty of Medicine and Deputy Director of Cancer Sciences within the Cancer Research UK Clinical Centre and Lymphoma and Leukaemia Research Centre of Excellence.

He graduated with his first degree in York in 1993. He then undertook his doctorate at the Imperial Cancer Research Fund (now Cancer Research UK) within University College London (UCL) in 1997.

This was followed by post-doctoral research at Imperial College London and UCL. He also had research periods in Frankfurt and Michigan, before returning to Southampton in 2004 as a lecturer.

Professor Townsend's group is interested in understanding how epigenetics and exogenously added small molecules can alter cell fate and a cell's response to injury.

He is co-founder of the University of Southampton spin-out and now Oxford-based pharmaceutical company Karus Therapeutics. He has extensive experience in IP generation, protection, consultancy and enterprise activities.