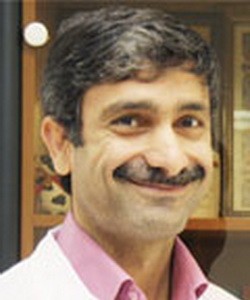 Hossein Baharvand is an Iranian stem cell and developmental biologist, a distinguished professor, the founder and director of Royan Institute for Stem Cell Biology and Technology.

For the first time, he generated the mouse and human embryonic stem cells (2003) and induced pluripotent stem cells (2008) in Iran. This has enabled his team to pursue many avenues of research into translational research and regenerative medicine. He has focused his research interests on improving the translational research and regenerative medicine mainly through the understanding of Stem Cells and Developmental Biology and Biologically inspired Engineering. He has been working on trans differentiation and pluripotent stem cell differentiation into cardiomyocytes, neural cells and hepatocytes. He has also been studying the pluripotency mechanism and germ cell biology. He has also been making numerous contributions to clinical trials and tissue-specific stem cell transplantation; as well as developing cell manufacturing.